Two years later: where do we stand?

Click on any image to see a larger version

In August/September 2013, I published an extensive review of the Metabones adapters for mounting Nikon F-mount lenses onto Fujifilm X camera bodies, including the Speed Booster focal reducer model, as a series of eight blog posts:

This July 2015 update covers some relevant developments since that time. 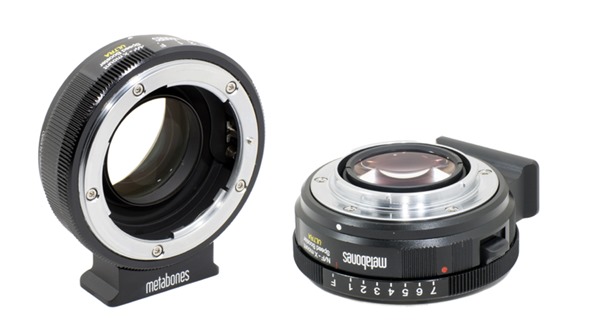 The original Metabones Speed Booster, announced in January 2013, counted 4 elements in 4 groups. Both versions share the same 0.71x magnification, and so reduce the crop factor of  Fuji X-mount cameras from 1.5x to 1.07x.

The new optical formula significantly improves corner sharpness and reduces vignetting when using lenses with a longer exit pupil distance, such as ultra-high speed (f/1.2 and below) primes and pro-grade f/2.8 zooms.

Note that my earlier tests clearly demonstrated this significant pixel vignetting effect with the AF-S 70-200mm f/2.8G VR (type I).

One review section, The Metabones approach to aperture control, dealt with the operation of the aperture ring available on some adapter models - including the SpeedBooster version - to control the shooting aperture when using G-type lenses (the ones that don't come with their own aperture ring).

As noted in the review, the original mechanism does not provide a linear control action: (half) steps on the aperture ring do not correspond to equally spaced changes in the lens aperture. This significantly complicates the process of manually setting a precise aperture value.

With the release of the SpeedBooster ULTRA version, Metabones has changed the aperture control mechanism and the control ring marking on both the Speed Booster ULTRA and the ‘glassless’ Nikon-F-to-Fuji-X adapter. The image below shows the original version of the latter at left, and the updated version at right. 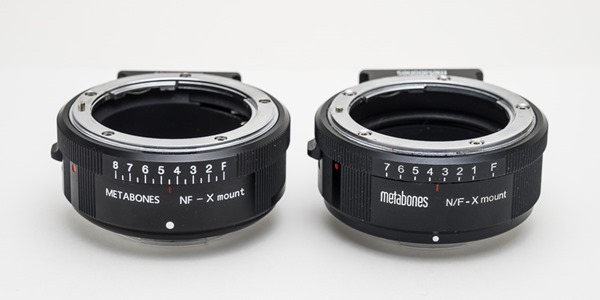 It is immediately clear that the aperture scales have changed. For some reason, the lettering moved from ‘F-2-3-4-5-6-7-8’ to ‘F-1-2-3-4-5-6-7’. Perhaps this is an attempt to more clearly indicate the amounts of f-stops down from the fully open aperture position (but, as we will discover, that doesn’t hold…)?

The original version has 15 well-defined click stops. The revised version no longer has discrete click stops, no doubt to facilitate the continuous aperture changes desired by videographers. The unit however is shipped with the necessary extra hardware parts to ‘install’ a click system should the user so desire (instruction videos are available on YouTube).

More importantly, Metabones radically changed the mechanism that drives the aperture control lever at the back of a Nikon F-mount lens.  The original rotating actuator is replaced by a sliding tab, that provides the linear motion AI-S and later Nikon lenses expect: the aperture lever travels the same amount for every f-stop.

old at left, new at right

The difference in operation is best shown by this stop-motion animation:

old above, new below

I had the opportunity to have a thorough look at the new design, as one of my friends kindly loaned his copy (thanks, Wim!).

I measured the effect of the adapter’s aperture ring position on the lens aperture using both the old and the new Metabones adapters, using four prime lenses (Nikon 50/1.4, 50/1.8 and 85/1.8 AF-D’s, and my trusted Tamron 90/2.8 macro), with the following result: 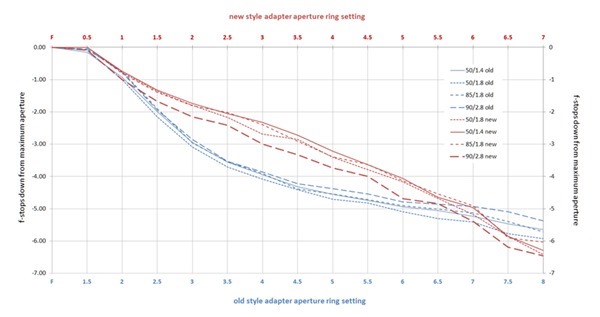 Note that some of the jitter of the ‘new’ curves may come from the fact that it now is harder to precisely set (or repeat) an aperture value, due to the now click-less control ring.

After averaging each set of curves, we find the following: 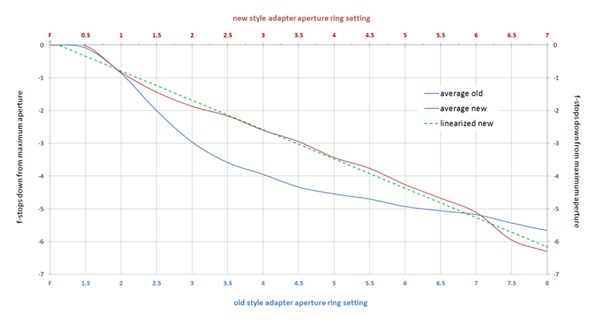 It is more than clear that the new aperture control design results in an almost perfectly linear action, with a maximum of about 6 f-stops down from the fully open value (which of course depends on the attached lens). There is still the half-stop ‘loss’ at the beginning of the curve.

The linear behavior makes it a lot easier to work with G-type lenses (without aperture ring). Of course, I still prefer shooting with older lenses that have their own aperture ring.


Click on any image to see a larger version

Thank you for this article. I was starting to panic because I bought a second-hand Metabones via Marktplaats and thought it was an older version because the numbering was different from some illustrations I had seen. But thanks to your article I now know it's the latest version!

All images © 2009-2016 René Delbar, unless specified otherwise. All rights reserved.
If you would like to use some of the images or have any other question, please send an email to renedelbar [at] gmail.com